This morning I awoke around 4 am with sounds of the wind and heavy rain against our windows.  I snuggled back in to sleep until 6 am.  By the time I got dressed and outside to take out, one at at time, our "gang" it was really windy and rainy, at times turning to wet flurries.

Today was a regular kind of day with last night's dinner dishes needing done up, two loads of laundry to be folded, and the vacuuming of a whole other Bandit from the floors.  Nothing too strenuous or taxing really was done today.

The only thing that had been taxing was the thoughts of being lied to.  Really other then the odd "fiblet" to protect someone, or maybe out of a bit of fear, I do not believe I have ever viciously told lies to harm or deceive anyone, ever !

Once again we have came across people who have lied and been deceitful to us.  I was distraught of learning about this out and out nastiness, even thought I had been suspect to it I had tried to think the best.  The worse part of all of this it is not even youngsters, it is people way older then I !  I suppose once a person(s) has made a practice of lying and being deceitful all their life it remains to be their life all through.  Very sad indeed.

Oh well, I really am of the opinion of what goes around comes around, not wishing bad on anyone, but when we have paid our dues by being honest, why should someone else get ahead from being dishonest?  It does not seem right !

Rob had came home later this afternoon,  and actually took me downtown Wiarton to do a few errands such as the Post Office, Bank, and the Grocery store.  Sunday I had picked up my Mother a new toothbrush and some Sweet & Low Candies I know she likes, so he dropped me around to Gateway Haven so I could deliver them off to her.

"I found Mom in her room knitting away in front of her beautiful bay window.  Oops I forgot to "cue" her to smile this day.  My brother is picking her up on Thursday to go get her hair coloured and all dolled up.  This will be a nice outing for her." 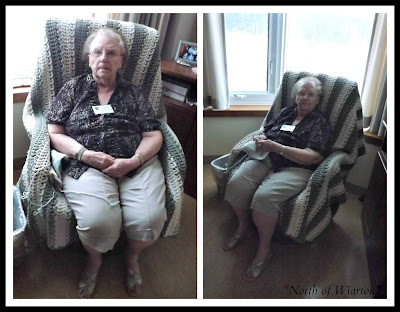 "Once I had left Mom with promises of being back for a longer visit, off toward the Foodland store we headed, not without stopping down to look across the frozen waters of Colpoy's Bay.  Also down by the Bay is where the Old Train Station is located." 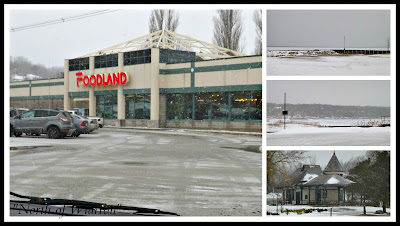 I find it kind of nice going into the grocery store at times.  It is like a little social outing when I run into and have a bit of chat with people I know, but do not see on a regular basis.  It is a nice "homey" feeling.

"Off we headed back home.  The photo to the left is when we had been going into town, and the photos on the right were coming home.  It had worked itself right into another bluster of "more SNOW again"!" 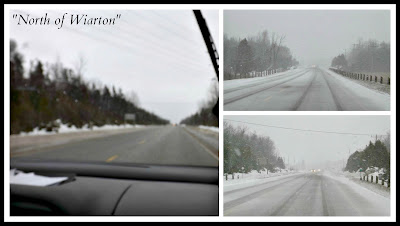 "Since I had been cooking like a Mad Woman, that I  had been doing since the freezer broke down, I decided for our Dinner tonight we would have some of that Big Batch Chicken Soup I had made up last Friday.  It sure was good with along with a Grilled Cheese Sandwich by really hitting the spot."

This morning I had been reading what one of my favourite Food Bloggers had posted, who happens to be Mary of One Perfect Bite, to see it had been one of my friend's favourite treats she loves making, this being Biscotti.  Mary's post this day was Cinnamon Chip Biscotti.  If you remember, my friend Sharon, had brought me back from Florida some Hershey Cinnamon Chips just after Christmas.  Since she is still in Florida she had some on hand there in her Pantry.

"Sharon whipped the Cinnamon Chip Biscotti up in no time after I had posted Mary's link this morning onto Cindy's Recipe Exchange.  Oh wow Sharon they look so good, and I do LOVE me some Cinnamon.  Thank you for sharing, even if it is via photos."

I am patiently waiting for my new Whirlpool Range Oven so I can begin baking a few creations I have in the back of my mind.  One will be putting to good use the Hershey Cinnamon Chips Sharon gifted me.  Thanks Sharon.

Last week I was approached via Email by Knorr Canada and offered an interview with Knorr Spokeswoman, Sandi Richard.
Sandi is working with Knorr Canada to help answer the ‘What’s for Dinner?’ question, and the What’s for Dinner? program was created to help families navigate the Dinnertime dilemma. The evening meal can ‘eat up’ a lot of moms’ day, as forty-four per cent say finding a recipe that suits their entire family is a challenge and three-in-ten struggle finding the time to cook a meal. When all is said and done, the large majority of moms (85 per cent) are looking for easy solutions for mealtime options so they can spend quality time at the dinner table with their families.

I wanted to include my Recipe Exchange members in this given opportunity, so this is what I put to them after I had received the email: I would LOVE to know if anyone in Our Recipe Exchange would have a Question(s) they would like to have put to Sandi on behalf our the Exchange, that might be included in the questions I comply myself for Sandi. Would love for any and everyone's participation in this most flattering opportunity. Please post your question(s) in the comment section below, and I will take note of any and all. Thank you in advance.

Today I submitted five questions to Knorr Canada to be answered by Sandi Richards.  I am hoping later this week I will be posting about this most flattering experience soon.  Thank you Knorr Canada for this opportunity.

For those who follow me here, know I have enjoyed in preparing with great success Knorr's What's For Dinner Recipes such as Chicken with White Wine Cream Sauce, Savory Cheese & Leek Scones,  Herb-Rubbed Citrus Chicken, , Skinny Scalloped Potatoes, and one of our all time Classic Favourites, Shepherd's Pie with a Knorr "twist" of course.

I have yet to be disappointed with a Knorr Recipe.

Rob is gone out on a couple of Hospital runs, so I think I will wrap things up here, make myself a hot beverage and give my Sisters a call, "Just North of Wiarton & South of the Checkerboard".

**Disclaimer:  I have not received anything from Knorr Canada for posting my opinions here about their Company or their products.
Posted by Cindy@NorthofWiarton at 2/19/2013 07:01:00 pm