Where To Find The Time To Balance?

I really truly thought I had a handle on this day.  Wrong again ! this will teach me, once again, do not make plans as Mr. Murphy, or husbands will throw a wrench into them.

First thing the "pack" had been out, about and in, my "Crabby Cabbie" had left for work, I had guzzled down 3 cups of Java, settled on in to ....

"Finish labeling all the Dehydrated Foods I had done to day, even clearing out a spot in a cupboard for them (the cupboard cleaning was my biggest challenge for the day).  There is so much satisfaction looking at a job well done, is there not?" 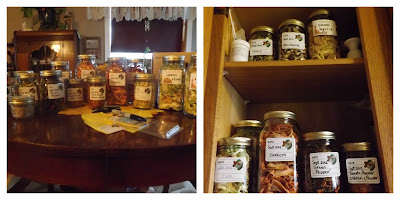 Next I had brought up a bushel of tomatoes from the basement which had nicely ripened over the past two weeks from their "green" state of hardness.  Had them at the sink propped up on the stool all ready to get them washed up when the phone rang .... my mistake of the day?  Yes, I answered it.  It was my most loved husband, the "Crabby Cabbie", could I do him a favour please?  *Sigh* if nothing else in my lifetime will I ever learn to use that little two letter word, "NO"???  No, I don't think I ever will in this lifetime ..... or a next.


"Yep, this was the time I found myself walking out the door this morning.  See how fuzzy I felt about doing that?  Ha ! not really I realized something had gotten on my camera lens and it needed a good cleaning." 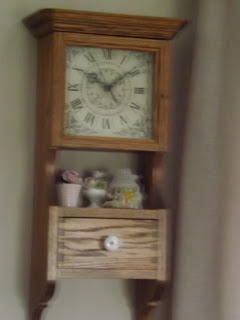 It was not a total waste of time for me, as I did get to stop at a Giant Tiger store, who just  happened to have Half & Half Cream on for $1.97 / litre, which we just so happened to be out of.   Great savings there, as it is around $3.69 regular price here in our local store.


"It was raining and very cold.  For the life of me I could not understand why this Dude was running about on his Harley.  Really is this part of being "tough & cool".  Not in my books ... brr." 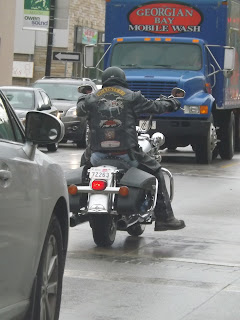 I was hoping after Giant Tiger I could high tail it back home, but "NO", there is that little two lettered word again, it was not to be .....


"On down the highway to Southampton I was to go, as the Van was less then a quarter tank of fuel and Rob wanted me down there to get it filled to the top." 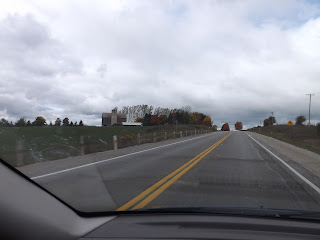 Good thing I had a bit of cash on me, as the Debit Machine had been "out of order" at the Saugeen Gas Bar.    I rarely have cash on hand, so we both lucked out, as I had enough to fill my Van and give the "Crabby Cabbie" vehicle 3/4 of a tank.  $107.00 later mind you, but we were good to go again.  Finally I was able to head on back home.


"I could drive all over Bruce County and stop every couple of miles or so to take in the Beauty of  Fall.  Every direction holds its beauty." 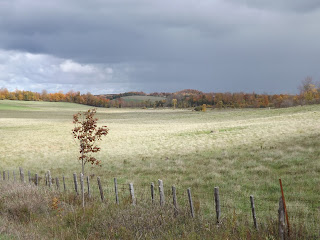 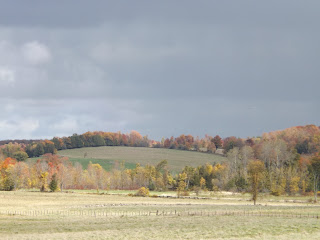 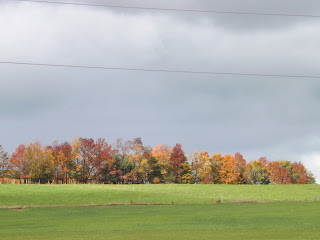 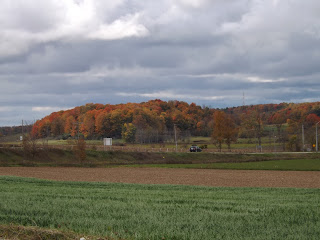 Back home I could not get at what I had planned this day, as I first had to attend to all our "Checkerboard Aussie" needs first. 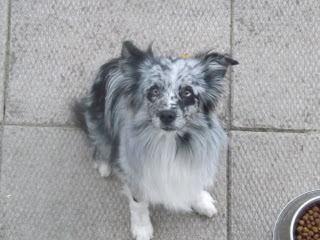 "... and this is our own blustery cold backyard." 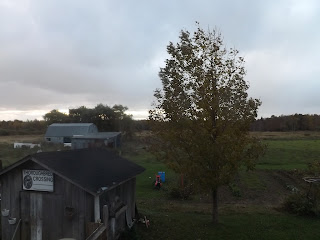 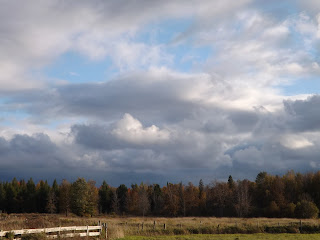 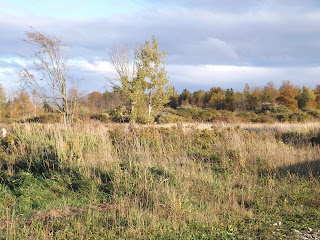 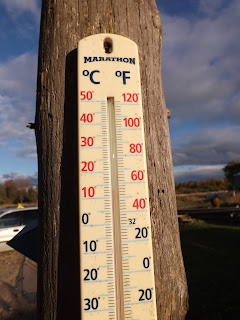 "Today was the first day we "fired" up the wood stove, it felt that cold in here.  It was quite Windy out as well." 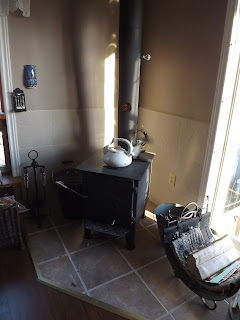 Once everyone had been attended to I finally got going on part of what I had planned on doing for this day. Anyone chancing a "wild" guess, I don't suppose?


"Washed, peeled ... some diced and some simmering itself down into a sauce.  Tomatoes or
To-mat-toes galore, if you will."

Hopefully tomorrow morning there will be "NO" interruptions from anyone or anything !!!  As I need to put down some more Black Bean and Corn Salsa.

There is so much to always do.  The floors need washed, there is laundry to do, the bathroom need cleans, and oh my Gawd the kitchen needs re-hauled !!!   I know I have slowed down in my speed the past four years, but where do I find the time to balance it all and still enjoy a few things I like doing???  There never seems to be any time to have it all done all at once !!!  NEVER !!!

Oh well, I suppose I will just have to resort myself to my life always coming apart at the seams, as this is how I have been feeling the past few months.  Now that I get thinking about it, I really think it has been the past Year ... I have been out of sync and routine since my Rob began his "Crabby Cabbie" adventure.  The schedule and hours he puts in can be so erratic at any given time, it is difficult for either of us to really maintain any kind of routine seemingly at the best of times.  We could both go 24-7 some days and still feel like we are back paddling.  Ha !  The success of owning your own business, and the overhead that goes along with it I suppose.

Really I don't mean to complain, however I miss my routine I had established for years ... you know, breakfast, lunch and supper.  Not Dinner, see ya and lunch.  It has been only a Year, maybe in one more Year I will "get it" ... there is always hope you know?

There best be hope, as I have also been find myself overeating more then usual.  Trust, you, me, we all know it is much easier to "put it on" then "taking it back off", now don't we?  I have been trying to brainwash myself in putting 1/2 hour a day aside, regardless of anything else, to begin doing some Leslie Sansone "Walk at Home" exercises.  Willpower, bring on the will power will ya baby !!!

*Sigh* I often wonder where my Willpower has escaped to, as I had it over three years ago when I quit smoking.  That in itself was a very difficult and huge feat.  What's up with this overeating?  okay one or all of the following:  stress, depression, feeling out of routine, menopause (I love being able to use this one so often now), blowing off caution into the wind, you name it, it could be the cause of it !  Smarten up I say, smarten up ... or else I will really feel "sh*tty if I keep carrying on the way I have been, even more sh*ttier then I have already been feeling lately.

I don't eat bad food usually, just eating more then what I should sometimes, or other times a lot maybe? .... okay Willpower I am willing you to take over !   Wish me luck, cause I know I need it.


"Right after the Thanksgiving Dinner Feast I am about to have myself tomorrow, I will get right to trying out that Willpower State of Mind again .... "

Ha !  there are lots of those Wild Turkey strutting their stuff around Bruce County, wonder how many are being served up this Thanksgiving?

Tomorrow brings with it another day, another day brings with it more hope, hope there is always another brighter day to be enjoyed, "Just North of Wiarton & South of the Checkerboard".
Posted by Cindy@NorthofWiarton at 10/06/2012 08:46:00 pm