Thank goodness my Rob had put on his "Crabby Cabby" hat and long gone to work by the time I arrived back home after 4:00 pm, as I have had a very very long day and am "Done like Dinner" and very happy I don't have to make any Dinner this night !!!

My day began just before 3:00 am.  For over the past Year or so, when I have usually woke up in the wee hours of the morning I have made myself just stay in bed until at least 5 or 6 am, but for some reason this morning it didn't happen.

What on earth was I doing at 3 am?


"The juice from the tomatoes I had done yesterday had not quite been cooked down into Tomato Sauce, so this is what I was doing." 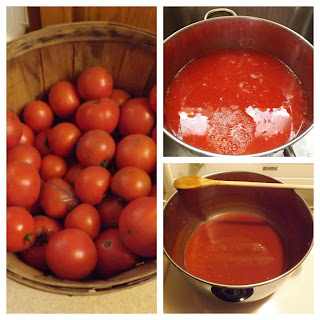 I also caught up on some Facebook things, updated a couple of items on Cindy's Recipe Exchange, and also went through some emails, as well as caught up on all my Blog friend's posts.

One email I had received was from my friend, Sheree ....


This is incredibly loving and touching.
It was a busy morning, about 8:30, when an elderly gentleman in his 80′s arrived at the hospital to have stitches removed from his thumb. He said he was in a hurry as he had an appointment at 9:00 am. The nurse took his vital signs and had him take a seat, knowing it would be over an hour before someone would be able to see him. I saw him looking at his watch and decided, since I was not busy with another patient, I would evaluate his wound. On exam, it was well healed, so I talked to one of the doctors, got the needed supplies to remove his sutures and redress his wound. While taking care of his wound, I asked him if he had another doctor’s appointment this morning, as he was in such a hurry. The gentleman told me no, that he needed to go to the nursing home to eat breakfast with his wife. I inquired as to her health. He told me that she had been there for a while and that she was a victim of Alzheimer’s Disease. As we talked, I asked if she would be upset if he was a bit late. He replied that she no longer knew who he was, that she had not recognized him in five years now. I was surprised, and asked him, ‘And you still go every morning, even though she doesn’t know who you are?’ He smiled as he patted my hand and said, ‘She doesn’t know me, but I still know who she is.’


How many know this to be true? how many  have and still do experience this? how strong is a person's love for another? incredible and touching?  Yes to all !!!  My heart was touched with tears shed very early this morning.


"The Celery I had also prepared and placed into the dehydrators last night was finished around 7:30 am, so I also took care of this." 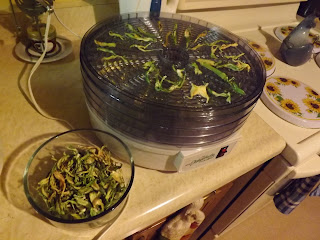 "Checkerboard Aussies" needed out, about and fed this morning, the bed had to be made (once Rob had risen), then it was time to get myself ready and out the door by 9:15 to attend to Wednesday's VON SMART Exercise program in Wiarton.  Off I went ...


"What would be so significant about this photo to me?  This was a test picture taken after I had dropped my camera when going out the door this morning, almost giving myself Heart Failure when doing so ... oh man I really don't need to be replacing another camera, now do I????" 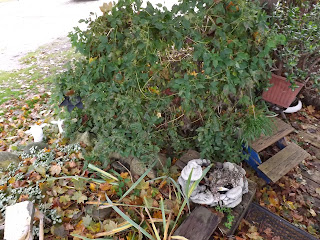 VON SMART exercise program finished up at 11:00 am.  I got home, dropped off the Van, only to be picked up a few minutes later to be driven up to Lion's Head this afternoon where some of us VON SMART Volunteers attended to a First Aid Course.


"I am officially certified to now administer Emergency First Aid, as well as AED AND CPR for the next 3 Years." 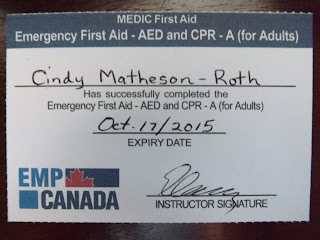 However educational and beneficial, I did find the day to be a extremely long one, especially since I was feeling much discomfort by the pain in my neck, along with a terrible headache.  Thank goodness my friend Andrea had some headache medication with her, as mine had been left behind at home.

My stomach is now upset, my neck pain has not subsided and I am really starting now to feel beyond "Done like Dinner".   I really hope I am not coming down with something, as there is way too much to do for that to be happening.  The sad part is I can hardly wait until it is time to take our "Checkerboard Aussies" all out for their last run of the evening, so I myself can call it an early night with hopes of a good nights sleep ahead, "Just North of Wiarton & South of the Checkerboard".
Posted by Cindy@NorthofWiarton at 10/17/2012 06:02:00 pm