Agility? Naturally She Is An Aussie !

"Last evenings jaunt out and about with the "Checkerboard Aussies".  What a beautiful sky." 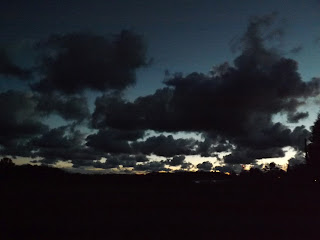 "Beacons in the approaching dusk." 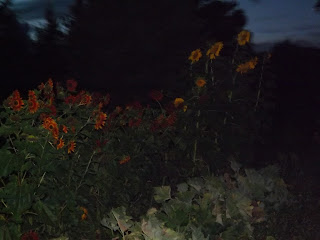 "Lexus sits on command especially when she sees the camera in hand." 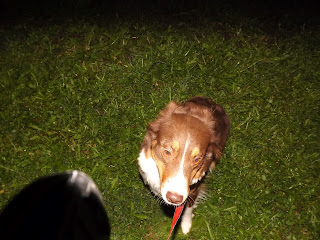 Before I go into my present day, I would like to say  a warm "welcome" to Doodlebugmom" , who has so been so kind to join along by following my daily ramblings.  Thank you for being here.

Now onto more of my daily ramblings ....

Not only I, but Rob as well, were drained of seemingly all energy this morning.  We went through the paces by necessity, not of want.  Finally we got ourselves a bit motivated and out the door.  On our way to Owen Sound, we dropped around a couple of things to my friend, BJ's place.

"I love BJ and Paul's Garden Art, as so tastefully done it is." 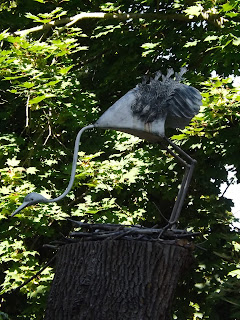 "What a creative way to make use of a tree which still has purpose (Ha, BJ ... with purpose)." 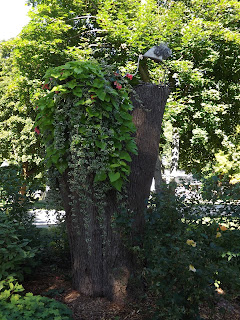 "This Garden Angel is so very unique.  A place to hold a candle, possibly a citronella candle in the eve of warm Summer nights?" 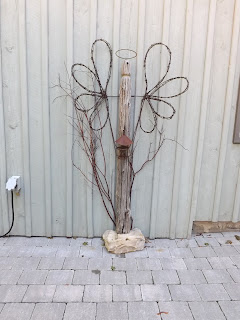 Finally after much chatting and catching up, Rob and I finally took our leave; difficult to do as I love BJ's warmth, energy and the feeling of Down to Earthiness.

We made our trip to once again return home.  While Rob re-twined the Weed Eater I busied myself in the Kitchen.

"Yesterday I had baked up these Chicken Breasts, posted with the statement of "stay tuned"." 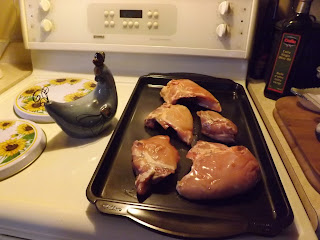 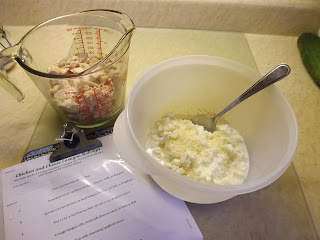 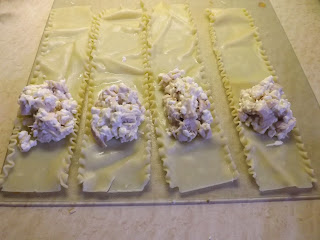 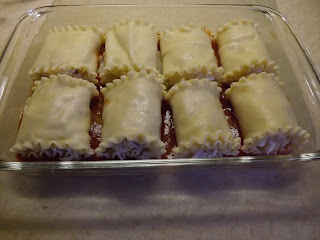 "A light sprinkling of Italian Seasonings on top." 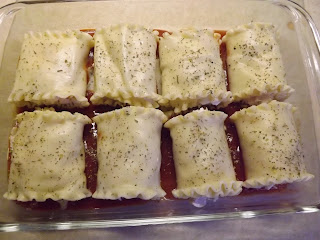 "Remainder of Sauce poured over top, all ready to be popped into a 350* Oven until heated thoroughly." 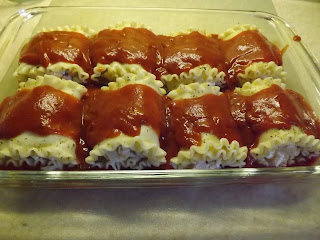 Once this was all ready and sitting on the sidelines to be popped into the oven for our dinner later on, Rob and I decided (or maybe it was I who decided?) we would get the outside of the bathroom and our bedroom windows washed today.

While we were getting ready to get this chore started, my friend, Caroline and her family popped on by to return the Crocks she had borrowed to do down some pickles.

"Caroline also brought along a very "Huge" jar of Dill Pickles for Rob and I.  Wow ... that is one big jar of pickles!" 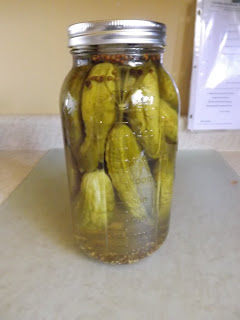 We had a great little visit, with an offer put forth to me to come on by as Caroline has lots of tomatoes she is happy to share with me .... hooray, I will be getting some tomatoes canned after all !!!  Some from our Garden and enough from Caroline's to see us through this upcoming Winter.

Once everyone had left, it was time to get back to the chore of the windows. 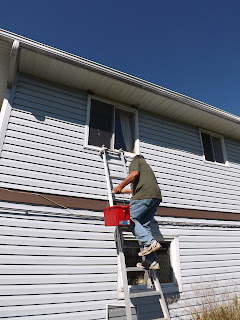 "Lexus appeared to be somewhat curious about this ladder and what Rob was doing up there." 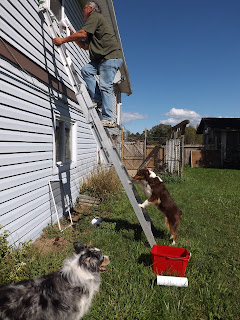 "Hardly believing what we were seeing, up the ladder Lexus went !!! " 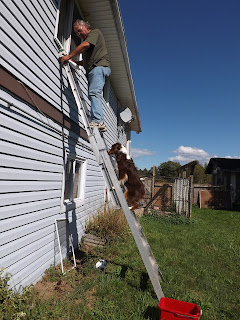 "Here she is again, maybe thinking Rob still could use some help?" 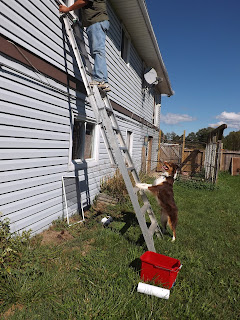 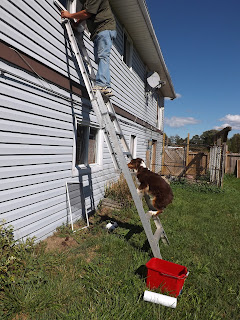 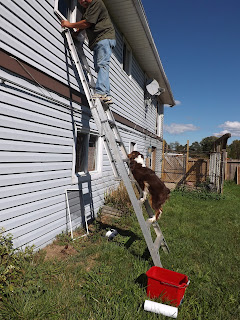 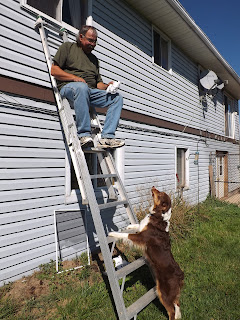 Amazing is our Lexus girl.  Agility?  Naturally, she is an Aussie !  You can imagine how happy I was to have captured this on camera ?  You bet I was !

Bandit finally managed to break his plastic head cone by banging into enough stuff and rolling around on it umpteen million times.

"Yep, as Caroline calls it, "the cone of shame", was no more after today." 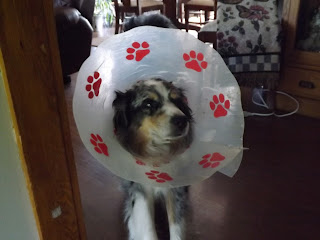 Within minutes it seemed Bandit was back licking at the Hot Spots causing them to open again.  We could not have this happening so off to Owen Sound we had to go again.  Thank goodness this happened just before 4 pm, as the stores were to all be closed at 5 pm.

After we had made it to Gardel's Pet store to obtain our purchase, Rob said he had wanted to stop by the No Frills Store.  I waited in the Van with Bandit while he ran in.

"I could hardly believe when he came back out and handed me in this beautiful bouquet of flowers !  saying these are for all the times I love you.  *Sigh* my day was made complete and then some .... " 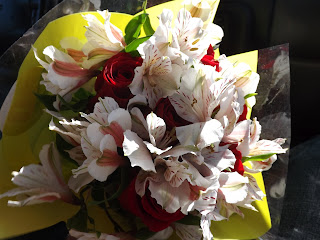 "The very first thing I did when we returned home was place them in a vase of water.  Are they not lovely?" 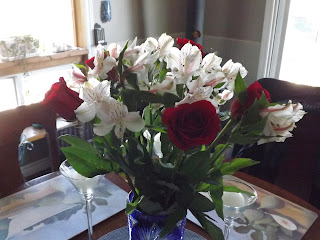 "Then my wonderful Ham of a Husband had to further proclaim his love for me with a rose between his teeth.  Ha !  my dear Rob this is why I love you so much for the way you care and make me laugh." 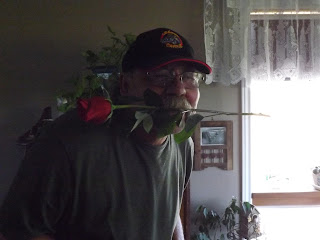 "While I had been placing my flowers in a vase, Rob was putting the new "cone of shame" on poor Bandit.  I think we have to go into the "Checkerboard Aussie" fund to repay this $52.00 to our bank account." 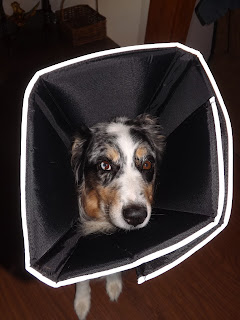 I had also turned the oven on with the Chicken Lasagna placed inside to be heated just before Cousin Brand and Paula stopped by on their way back home from their Dyer's Bay cottage to drop back off our boat and motor to us.  We had a nice visit before they had to get on their way.  By this time our Dinner was ready to be served ....

"Believe you, me, my mouth was watering when I took these out from the Oven." 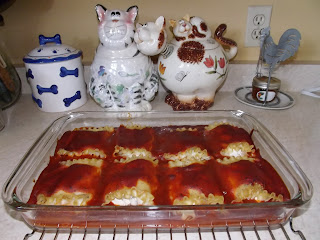 "Should you think this looks to be delicious? it really really was." 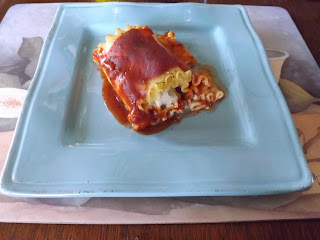 "With a Caesar Salad on the side topped with Epicure Smokey Bacon topping." 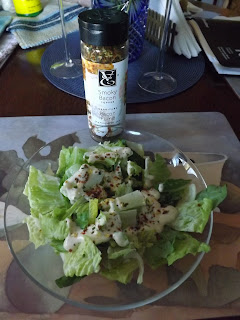 What a perfect way to finish off a day that had started off on such a low energy note.  It certainly did not remain a low energy day, as it heightened with a flourish of fantastic energies, surprises and enjoyment, "Just North of Wiarton & South of the Checkerboard".
Posted by Cindy@NorthofWiarton at 9/09/2012 08:44:00 pm