What a day most of Ontario has been having with a Wintry Mix from reports of freezing rain on the other side of Kitchener, rain in Toronto, to snowing and blowing in and around a number of places.

I have spent barely any time at home today (again), once I left the house just before 8:00 am to head up North of the Checkerboard to Lion's Head.

I had joined the Lion's Head Swap group on Facebook where I had came across a complete bedding set for a double bed, as we need one for when the boys visit once the extra room is all set up, so prior to my Doctor's appointment I headed there to pick up my purchase.


"All ready to be washed up fresh, comforter, skirt, set of sheet with extra pillow cases for a Grand Total of $5.00 !  How could I refuse such a deal ?" 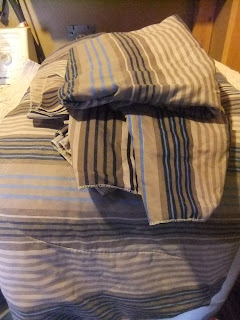 I then dropped off some new clothes I had picked up for Mother that had been hemmed up, however I hadn't time left for a visit as I had my weekly Doctor's appointment.  Once at the Doctor's I had decided I had not wanted to wait since the weather was nasty and the roads very greasy, so I headed very, very carefully back home.

I was home long enough to look after the "three pack", make the bed, do up a few dishes and make two phone calls just before Rob came to collect me to take me off to Owen Sound for my follow-up appointment with Dr. Newton regarding the bout I had with pneumonia.


"Heading South just outside of Wiarton heading towards Owen Sound." 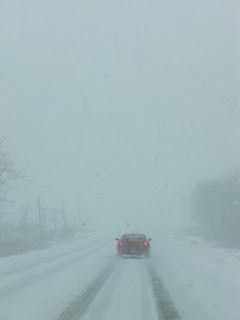 "We only happened upon this one Snowplow, coming off a side road the whole trip there and back." 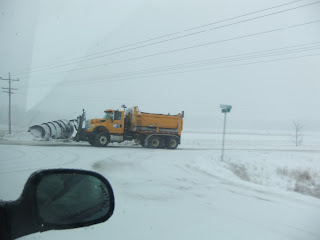 "I wonder if something is actually going to happen at the Old Duffy's Tavern in Hepworth finally after all these past Years.  Something was suppose to be happening there when we moved up eight Years ago, with nothing at all taking place there?  Hepworth is where my Father was born and raised, before the Hepworth Furniture Factory burned down and relocated in Southampton." 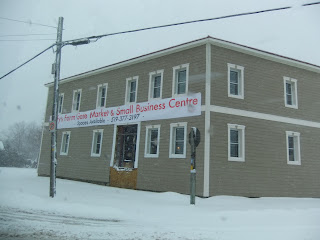 We made it to Owen Sound Hospital at the time I was scheduled to be there, only to find their computers were down.  Oh man, I waited an hour before I got my Xray done !!!  I don't know what is going to happen to these places if the Computers ever went down permanently, as they didn't seem to have it really all together in the one Dept., as to what the backup plan was to be?
Once I had the xray completed, it was no time at all before I seen Dr. Newton, who showed me the new xray, being very pleased the pneumonia was totally cleared away from my chest !  Hooray !!!  I hope never ever to be that sick again in my lifetime ..... nasty business that was being so sick for over three weeks.
Finally we were able to make our way back towards home ...
"Just outside the City Limits of Owen Sound." 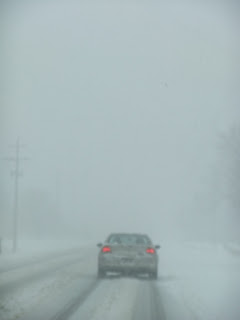 "Finally back in Wiarton heading down the South hill into town not too much further away from home, just up the North Hill and a little bit further from there." 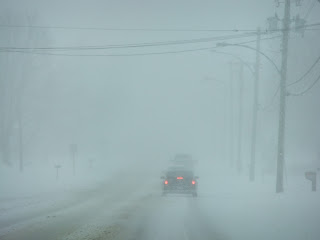 "Nothing like arriving back home Safe & Sound !  Imagine the front lawn was completely void of snow yesterday !" 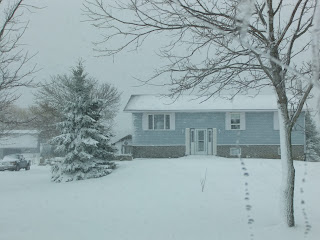 The most unfortunate part about all of this my poor dear Rob had to put his "Crabby Cabbie" hat back on and head back out into this miserable weather.  *Sigh* how I do worry some days .....

These kind of days wear me thin at times, more so then staying and home and doing housework some days.  Wonder why that it?  other then I find it very stressful driving in this "crappy" Winter weather we are having at the moment.  I know, I know, we have got off easy this Winter, but dang it all last Year was bad enough to fill three Winter slots in my opinion !

Northerly winds, falling snow .... a Snowstorm still outside my windows....

.... with me praying always my "Crabby Cabbie" is safely returned home to me.

I think I will check in with my favourite Wiarton weatherman guy to see what is going to be happening later on in about Wiarton and Bruce County?

Not really letting up too much before Midnight by the looks of things, with it looking better by Sunday.  Hooray I see some Sunday Sunshine peeking out there ...