Don't Worry Everything Will Be Alright !

It was get my butt out of bed this morning and get a move on as I had to head on over to the Owen Sound Hospital for 8:45 am.

I did manage to take Missy Mercedes out, dress myself, brush my teeth, have two coffees, and briefly check in on my email, oh yes and speak to my son, Paul, at 6:25 am, before I was out the door like a shot leaving Rob to take care of Bandit and Lexus before he had to put on his "Crabby Cabbie" hat and leave for work.

I was there in loads of time, at least 15 minutes before the scheduled time.  I was so totally happy as there must have been an issue with the parking lot gates ($5.00 to park), as they had been open when I pulled in.  YAY !!!  I have scored an extra bucks for something or other.

I was in and out to my appointment in no time at all.  I then took myself over to the Walmart Store, as there were a couple of photos I wanted to scan, and the Aveeno Moisturizing Cream was also on sale for $5.97 /384 ml pump bottle.  When I got over to the Moisturizing Cream section there was no sale going on, as depicted by this weeks flyer, and I most certainly wasn't going to pay $4.00 more for a total of $9.97 a bottle!


"Regular price for this Aveeno Moisturizing Lotion would have been over $10.00 after taxes had been applied.  Craziness man, craziness !" 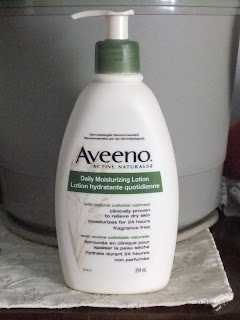 As it was I took it along up to the cashiers with me, who I showed the flyer to, wherein she then changed the price to reflect the flyer sale price of $5.97.  I am happy, and even happier I had purchased two at that price !
Since I had been hoping today's appointment would have been at the Wiarton Hospital, where I thought I would have then been able to see my friend, Diane.  Seeing it wasn't, I still went to there to say a quick "hello" and drop her around a 1/2 Vanilla & 1/2 Decaf Timmies coffee.  I loved seeing the look of surprise on her face when she opened her door to see me standing there !  LOL, those are the kind of surprises we all like to receive, are they not?  Hugs Diane !
Then it was over to our local Wiarton Foodland Store, as they had a One Day Sale on Bananas for .49/lb ($1.03/kg), and a package of 18 Dozen eggs for $2.49, usually the price we pay for 1 Dozen.  I also scored two bags of apples from the discount rack with not a thing wrong with them  for .49 cents a bag !
"Perfect apples with nary a bruise to be found, with visions of Banana Muffins coming up eventually in the "Crabby Cabbie's" near future .... " 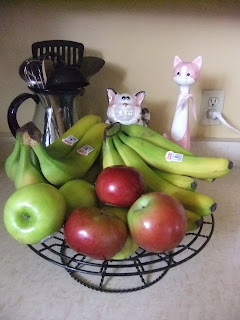 I am thinking with the couple of carton of eggs I bought, there will be a couple Quiche and omelettes in his future too.  LOL.
By the time I arrived back home here, "Just North of Wiarton & South of the Checkerboard", it was lunchtime, with three faces looking at me saying, "let us out, let us out", before I even unloaded my purchases from the truck.
I had Dinner for my Lunch, as there were leftovers from the Layered Enchilada Bake I had made last night for our Supper.
"All ready layered and oven ready." 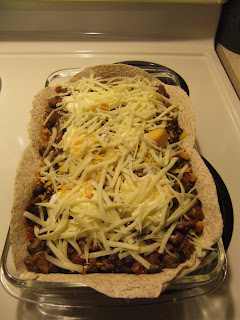 "Piping hot and ready to be served up onto our plates." 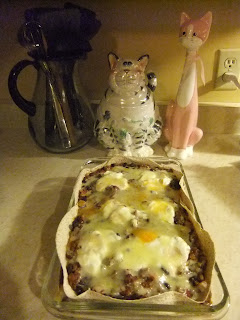 "Just waiting to be topped with some shredded lettuce and chopped tomatoes.  Yummy." 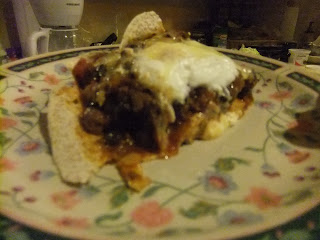 This recipe is one of Rob's favourites.  As I am sure I had mentioned before, I used a jar of Corn and Black Bean Salsa (just a tad over the 2 cups) in lieu of regular Salsa.  You can find the recipe at Kraft Canada at the following link:
http://www.kraftrecipes.com/cooking-tips/cooking-videos/layered-enchilada-bake-557.aspx
I also used large whole wheat tortillas, and shredded mozzarella and cheddar cheese mixed, as I had no Tex Mex Cheese on hand.  Ummmmm good it was, even heated up  for my lunch today.
When I was decluttering the other day, I had came across a picture of my son, Paul, back in the day when he was playing Hockey.
"This had been taken when we were down in Pennsylvania at the Annual Friendship Tournament.  This year had been the 25th Anniversary Year for this tournament." 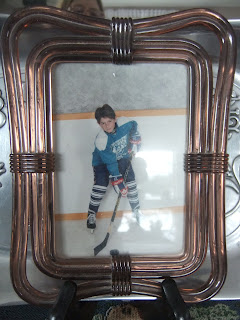 One of my most favourite photos, considering we lost all but a few when our house burned when we lived in Waterloo in August of 1997.  We lost everything in that fire.  The only thing that can NOT be replaced is photographs, everything else can be replaced.
Oh yes I received my Bell Telephone Bill just the other day, and man was I miffed (for choice of a not so nicer word) to find our Phone went up by $4.00 and Internet by $2.00, plus applicable taxes !  Oh man, oh man, it didn't take me long to get on the phone with Bell Canada.  After it was all said and done, they gave me a $10.00 monthly credit on my bill in exchange for a one year contract with them.  I have had a Bell Phone I am sure since I was 17 years old, and after all these years I need a contract with them for a year?
What is it all coming too? where does it all end?  Everything going up but the paychecks !  Same old story, is it not?

I LOVE Bob Marley !!!  so don't worry, everything will be alright.