Another Chapter Of My Life Soon To Be Completed & Closed

A most regular Monday morning here, myself and the "pack" doing our regular routine, with me then making a lunch for my "Crabby Cabbie" as he said he was going off to work on this "Family Day" holiday.

With Rob gone, I got to taking advantage of the cheap Hydro rates on the weekend/holiday rates by putting in a load of laundry.  While that was washing the bed was made and some vacuuming got done.  A typical Monday morning.

I was getting into a nice little morning routine when the phone rang around the hour of 8:00 am.  It was my "Crabby Cabbie" calling to tell me he had arrived at his point of destination, after driving 45 minutes down to Southampton, and nothing was open.  He was on his way back home.

Well I could not imagine why everything would be closed on "Family Day", being a holiday and all?  Will wonders ever cease with one having to go out to find these things on their own? why would anyone listen when told it was a Holiday and nothing would be open is beyond me !!!  LOL .... some things just never change between a man and a woman at times such as these, for some of us.

All ended well, as my "Crabby Cabbie" arrived back home, put on his "Rob" hat and got to re-loading up the wood supply in the basement, and doing a few other things needing some attention in and around the house.

This week marks the last week of the Decluttering Challenge for the month of February, put on by Carla over at My 1/2 Dozen Daily, which I had signed up for.  Week #4 - The "Dreaded" Challenge.  Before I display photos of what "dreaded" decluttering job I have choose for Week #4, I must make it known I have a few more "dreaded" challenges to be completed in our home, however since I am concentrating on the main floor, this is where I decided to get it all completed in its entirety, and this is why I now am doing what I have been putting off for almost a year now.

The job I have choose to complete for this week's challenge is what had been my Mother's bedroom for almost 5 years, before she retired to The Golden Dawn Nursing home last June 2011.  Since she moved out, the only thing removed or changed to this room was the removal of most of her clothes, and the disposal of the bed's mattress and her chair, all else remained a disarray of clutter.

I really haven't figured out why it has taken this challenge to get me to the point of taking on the decluttering and organizing this room.  I am almost at a loss here thinking about it.  What I am thinking is it is more then the decluttering and cleaning, as there is much emotion attached to my going through what remains of my Mother having lived with us.  Almost as another Chapter of life is over with and the door finally being closed.  It is very difficult to explain what I am feeling, as what I am feeling is a few different emotions without any explanation to go with them at the moment. "The bath seat I am thinking should be advertised somewhere.  It is quite the nifty item going up and down in the bath.  I wasn't sure where to begin at first, as I did get started at it today.  I ended up starting at the closet.  I have gone through everything that had been in it, with it now being completely emptied out." 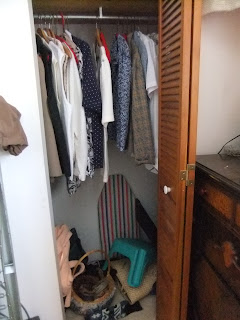 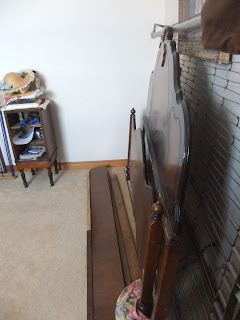 "The bedroom set is an Antique set I had purchased years ago, as seen in this photo it has "springs".  I hadn't realized there was "stuff" stuffed behind the dresser that will also need to be gone through". 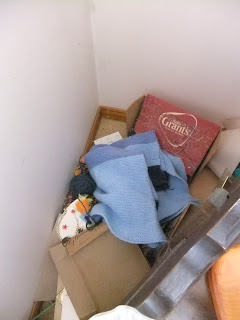 As the closet emptied I disposed of a bag full of clothes, not fitting my Mother any longer, some stuff animals and a few other items no longer needed.  I am confident I have a good handle on the last week of the Declutter Challenge.

I am now thinking why this has been such a "dreaded" Challenge to me, is that I have been dreading the mixed emotions that are going to go along with the decluttering and organizing of my Mother's belongings.  It is difficult, and something I have been dreading by putting off for so many long months gone by ..... now soon to be another Chapter in my Book of Life completed and closed.

By the time I was finished with what I got done doing today for the Dreaded Challenge, Rob and I made a trip downtown to the Salvation Army.  When we got back home it was time to get supper going, as we had both obviously worked up an appetite.

Today I made Kraft's Chicken Bruchetta Recipe for the first time: 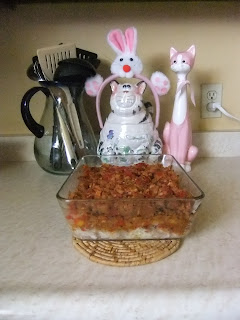 "This dish was very simple to make.  Out of a scale of 1-5, Rob rated it a 4 Star.  I can't see it standing alone without a veggie of choice being served as a side dish." 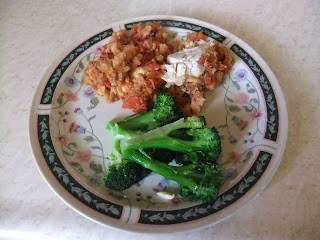 The recipe for this dish can be found at the following link:

If I were to make this recipe again, I would increase the amount of cheese layered, with maybe adding a bit on top of casserole for the last few minutes of cooking time.  I am a "cheesy" kind of person, ya know?

With Supper over and cleaned up from, I took off downtown for a walk with my friend.  The weather most certainly had been so perfect for a "Family Day" celebration !

I feel my day has been productive.  I can now sit back to relax and watch one of my favorite shows, The Voice, "Just North of Wiarton & South of the Checkerboard".
Posted by Cindy@NorthofWiarton at 2/20/2012 08:43:00 pm