Two More Down & Ten More Days Before It Is ?

TravelAnyone who has ever gone anywhere will tell you that traveling is one of the most exciting and life-changing activities that you can do. Observing a different culture will expand your mind while making you further appreciate the life you already live. This goes back to becoming an explorer: this world is your jungle so go explore! Who knows, maybe you’ll find a place you love so much that you decide to move. Imagine the positive repercussions a new environment could have on your life.
Who wouldn't want to travel? a few here and there I am sure, however I not being one of them.  Thoughts of travelling abroad have always been in my dreams, but really haven't so far been reachable in my lifetime.  Should there be a time travelling abroad is possible, I hope I squelch my fears of flying and embrace it.In the meantime, as I have said before, there is a whole World in front of me by way of my fingertips going across the keyboard ..... amazing photography and cultures at any given time.My yesterday got off to a slow start, but it did eventually get going with having a couple goals accomplished.  Two hours sleep a night does not enable to be at their very best when it comes to "getting r done", now does it?  I am sure there will be hopefully a night in the very near future Mr. Insomnia will stop coming a courting for a bit, and I will have myself some catch-up sleep.First thing in the morning, while the frost was still in the ground, and after my daily blog had been posted of course, Bandit and Mercedes had themselves a big run in the field.  Then before the rain started pouring down sometime before the dinner hour, Lexus and I went out to the garden to pick ourselves some beets.  Thank goodness, cause the rain did come tumbling down the whole rest of the day and evening .....Once Rob had gotten up from his not too "de-crabbiness" slumber, we headed downtown to run a couple of chores before lunch. 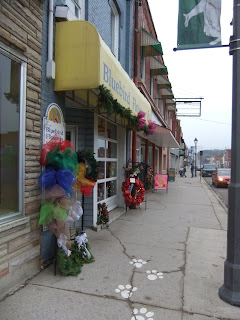 "Downtown Wiarton certainly looks like it is ready for Christmas, but there just seems to be something missing from the picture ..... "

After our running around was done, it was time to come home to get Dinner on the go.Rob, as so does our son, Paul, loves Schnitzel so schnitzel, new potatoes and fresh picked beets from the garden were on our Dinner menu for this day.  Have I mentioned before how much I love beets as a vegetable? of course I have !  "I so enjoyed our Dinner, with my mouth still watering looking at these photos .... good thing there are enough leftovers for "me" today !" 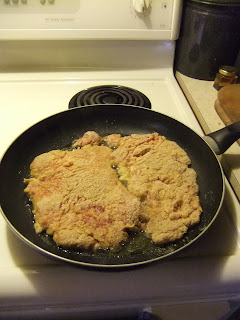 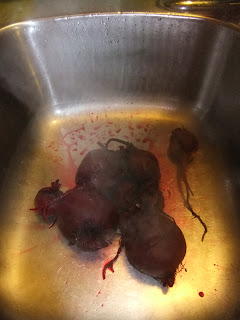 Once lunch was over with, the usual cleanup completed, my "Crabby Cabbie" off to work, it was time for me to get down to business.  That would be Christmas goodie business and I got all over it.  First I started with the easiest, of course, and got going on the Rocky Roads. 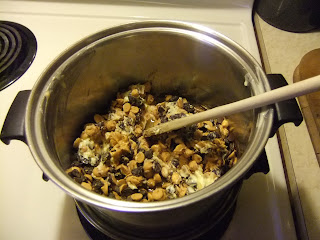 "Mixed, melted, cooled a bit before adding marshmallows then pressed into a wax paper lined dish." 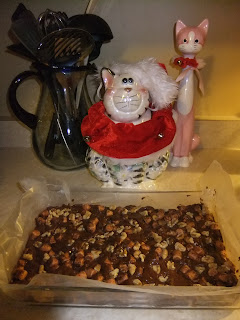 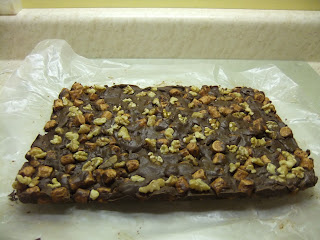 "Chilled, cut in half for wrapping, and put back into the fridge, out of sight and mind from my "chocolate" urges and "hips". 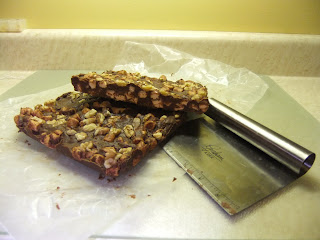 Rocky Roads, a favorite I make year after year after year .....
1 Cup Peanut Butter (which I just realized not that I forgot to put in these ones, lol)
3 Cups of Butterscotch Chips (2 Butterscotch & 1 cup Chocolate as I ran out of butterscotch)
1/2 cup margarine
3 cups white miniature marshmallows
Melt peanut butter, chips & margarine in a dbl. boiler. Let mixture cool a bit before adding marshmallows.
Line 9x12 inch pan with wax paper. Press mixture into pan & sprinkle with chopped walnuts.
Refrigerate for 2 hour.
— at Just North of Wiarton & South of the Checkerboard.
Warning !  Do NOT attempt to make any of these recipes when tired, as ingredients have been known to be left out, but then again maybe this is how new creations have been founded?  LOL  I was also short a cup of Butterscotch chips, so a cup of chocolate was the substitution.  As soon as I pickup some more Butterscotch chips, I will be making the original version of this recipe, with the Peanut Butter !Once again, one of Rob and Paul's favorites are Marshmallow Rolls (or Stained Glassed Windows).  Since I really despise the taste and texture of coconut, I made one roll without. 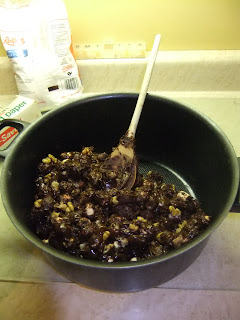 "Chocolate/margarine mixed melted and cooled a bit before marshmallows are added, then rolled out onto wax paper to form a log." 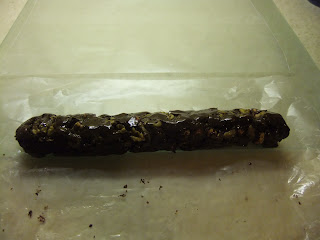 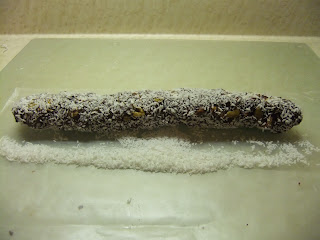 "Rolled in coconut on waxed paper, before being also wrapped in waxed paper and refrigerated.  Notice the one roll without the coconut, it has been sampled already and was "delectable"." 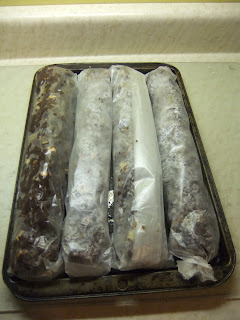 The amount pictured above is what this recipe yields:
2 cups semi-sweet chocolate chips
2 eggs
2 tsp. vanilla
1 pkg coloured miniature marshmallows
4 tbsp butter or margarine
2 cup icing sugar
1 cup chopped walnuts
shredded coconut (to roll in)
Melt butter & chocolate together over hot water; remove from heat adding well beaten eggs & Icing sugar, 2 tsp. vanilla and beat until glossy (I used a wooden spoon); add 1 cup walnuts. Mix & cool a little before adding marshmallows so not to melt them. Stir in marshmallows & stir until coated. Pour on wax paper to spread out, sprinkling/rolling in coconut. Form into a roll using wax paper to surround it. Put into fridge to cool. Slice before serving into 1/8 inch slices.
Can also be shaped into balls & rolled in coconut or icing sugar, or pressed into a pan for squares also coating with a sprinkle of Icing sugar.
NOTE: This must be kept refrigerated.
— at Just North of Wiarton.
That was that for my Christmas goodies this day, as it had been a full day between making Dinner, doing these two items, and never mind the amount of dish washing that goes hand in hand with all of it !  Oops, speaking of which there was also cleanup after I had strained and put the Chicken Broth I had made Sunday into containers to be frozen for a later use."Four Litres of stock with enough left in the pot to make a Chicken Noodle soup from today." 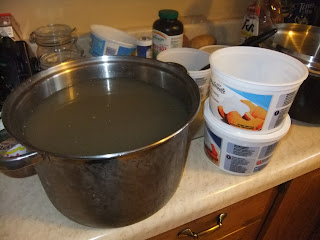 Oh man, I am still tired from my Yesterday, before my Present day gets started here, as I try not to get myself  overwhelmed by thinking too far ahead into the Future days and what still needs to be done .... it always gets done, and what doesn't was not important in the first place, so no need for "worries" after all.Oh yes, and the exciting part of my yesterday was I won a book from We Are Pet Nation, who I follow on Facebook and Twitter.  All I had to do was comment on their weekly "product", which just happened to be Dr. Pitcairn's "Complete Guide to Natural Health for Dogs & Cats, and my name was added to a weekly random draw.  Wow I am sure I can use a guide like this to refer to, especially with my "pack", or for one of my many other Pet Loving friends, who might be looking for some natural health solutions for their own pet. A Lover of Pets?  Check out We Are Pet Nation on their website as follows:  http://www.wearepetnation.com/You will not be disappointed, I can almost guarantee it.Onto my Present day and the Wiarton Airport Weatherman guy's report.

Ten Days before Christmas with temperatures like these?  Not totally unheard of, but really enough already !Lots to do with a couple more Christmas goodies yet to be prepared, so I am, once again, off and running towards a new adventure, "Just North of Wiarton & South of the Checkerboard".