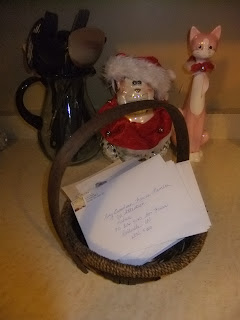 "The front foyer ready to greet any Holiday visitors.  Um, I am sure it was only a couple of weeks ago I put away the Spring arrangement, putting the Fall arrangement in its place?" 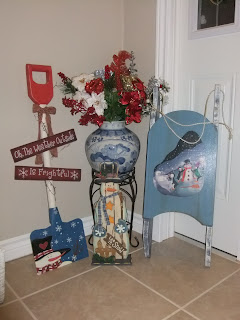 This was pretty much my Yesterday ......


I am feeling pretty sleepy at the present, as another sleep deprived night has made claim to my being, but onward I go as I am wanting to see what my Wiarton Airport Weather guy has in store for my day ahead.

There is certainly no yellow happening in this day's forecast unless the weather guy is wrong, as he has known to be in days gone by  There is always that "hope" of a little sunshine making an appearance.

No plans for tonight being the start to a beginning of a weekend?  Drop in here, as I am sure there is a Bruce County event that might catch your eye:

Other then a trip North of the Checkerboard to my Doctor's for my weekly shot in the arm, I am pretty sure I will be having a chase the "dust bunnies" around adventure in my day ahead, "Just North of Wiarton & South of the Checkerboard".
Posted by Cindy@NorthofWiarton at 12/02/2011 07:09:00 am