I survived another allergy shot in the arm yesterday, but what really got me was the "B12" shot in the other arm that I get once every three months.....oh man that one stayed with me for awhile.
A B12 shot is defined as follows:
B12 shots, also known as cobalamin injections, is a common vitamin used in the treatment of people suffering from acute anemia. People who suffer from acute anemia are found to have a deficiency of the B12 vitamin. These shots can also be used as an effective treatment for lowering stress levels, weight loss and skin diseases. It is also used as an energy booster. B12 is something which is not easily absorbed by your body therefore eating green vegetables can enhance the absorption rate.
Um now to figure out which reason my Doctor gives me a B12 shot in the first place is my next question ....my educated guess would be reason #4, lol.

Just before I headed out for my Doctor's,  North of the Checkerboard,  I managed to get a Roast Beef dinner put together in the Slow Cooker, so by the time I got home everything was all under control, giving me time to make a couple of my usual phone calls to my sister, Jeanne, and brother-in-law, Cecil in Nfld.

My sister, Jeanne, has been in  St. John, Newfoundland's, Miller Center for Rehab, the past week and a half, and had received her first report just the other day commending her on the leaps & bounds she has achieved in her stroke recovery within the very short time since her admission there!!!!  I was so terribly excited when hearing that news !!!  She should be homeward bound no later then the 20th of October, if not sooner!  Good news for her, Cecil, and our family, and Cecil's family.  *Sigh* what a relief .... even though Jeanne is so far away from all her family here in Ontario, it has been a blessing we have been able to talk to her on the phone, and I do myself at least two or three times on any given day.

My next phone call of the day was to Gem Webb, Web Designer, for Explore the Bruce, as I had a inquiry on how to find something on the "Explore the Bruce" website.  I had the "biggest belly laugh" of the day, as just before I called him I had received an email from him with a little "giggle" ..... should you go back into my blog from yesterday, you will see for yourself the reason for my "belly laugh" there, as I had to edit and republish it later in the morning to include my very "Special  Explore the Bruce Thank You".

Our dinner was ready around 1:00 p.m., with the choice certainly paying off for me, as there was enough leftovers for me not to think about what I was going to make for our next dinner ....

"There is nothing quite like a slow cooked Roast Beef with baby carrots, new potatoes, onion and gravey ..... um mm." 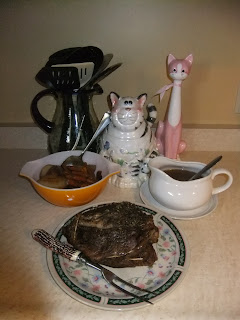 It wasn't long after dinner Rob had to leave for work, by that time the migraine headache which had been brewing in my head  had become "full-blown".  It was that bad it caused my stomach to feel sick and my teeth to ache.  Then again I thought the weather yesterday was right up to par with how my migraine had been ..... "bad" !!!

"This is what I looked like the rest of the afternoon with the caption changed to read "in bed until 6:00 p.m."." 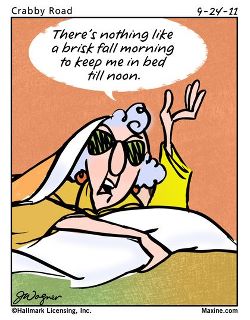 After some medication and a couple of hours bed rest, I was able to get up and get back at it again..... hopefully looking much better then "Maxine", lol.

Of course, my "Checkerboard Aussies" needed out by the time I did get myself back out of bed for the second time that day, so Bandit first, with Lexus having her turn second.

"I am very pleased with the second crop I am getting from the "Ever Bearing Raspberry" bushes we have lining our vegetable garden.  The second crop of berries being much larger then the first crop." 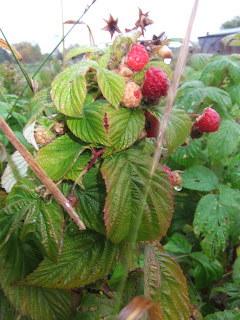 As I was enjoying a few of the ripened sweet raspberries, I look down beside me to see someone else was in there like a "dirty shirt" enjoying them as well...."
".....going at those raspberries as fast as she could." 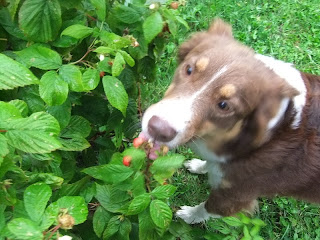 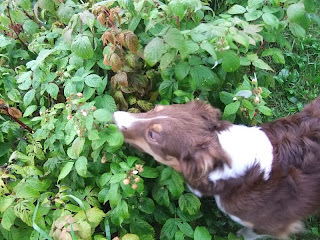 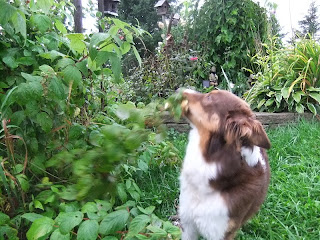 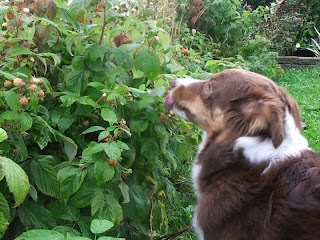 "How could Lexus not be just the picture of "health" with all  fresh fruits she consumes....lol." 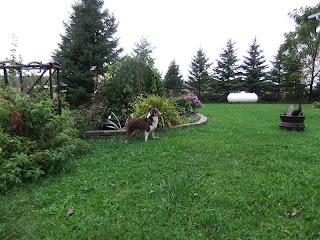 That was pretty much my "whole" yesterday, as a person can't do much more, and even less sometimes with a "migraine headache" stealing the show.
Shall I dare look see what the weather will be bringing today after having a whole day of rain yesterday?  What is there to loose, it is going to come whether I like it or not .... lol.
Wiarton Weather

Looks like it is going to be another gloomy day, but since I will be inside most of  the day, I am not going to shed any tears over it.

Bruce Peninsula Heath Services is having their 4th Annual Health & Wellness Fair today from 10 a.m. to 3 p.m., at the Meeting Place, 575 Edward Street, in Wiarton

Rob's cousin, Joyce, who is very involved with the Hepworth Legion, also emailed me to let me know there is a full Spaghetti Dinner at the Legion tonight from 5-6:30 p.m..  Dinner is $9.00, and includes spaghetti, meatballs, Cesar salad, bread & butter & jello & whipped cream for dessert.  Wow what a deal for all of that !!!

In the meantime, I think I will ponder life over a second cup of Java before I start moving too much further into my day ahead, "Just North of Wiarton & South of the Checkerboard".