Labor Day Weekend Already, Are You Kidding Me?????

We are on the Eve of the end of Summer's Labor Day Weekend. I sit here in disbelief, shaking my head wondering how yet another Summer has gone by so quickly? I really will have to go through my own past days to read what I did all Summer, as it most certainly seems like a "blurr" to me at the moment.

However....company is coming, company is coming....now the question is, "am I ready?".  Well, most certainly I am NOT....lol.  It is our good friends (actually are all friends not "good"?), arriving for the weekend, Doug and Vicki, who I never have to worry as to whether I am ready or not, as they are much like Rob and I, by just going with the flow and enjoying their Company, not just their surroundings.

I am a little bit ready though, as yesterday I did get our bathroom and kitchen made presentable, along with both floors washed.  No more "sticky" kitchen floor....yeah!  or for the time being anyway......

"Everything sparkling, clean and tidy, what a great feeling when it gets done." 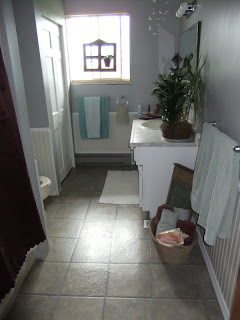 "Oh no, are those Peaches still on my kitchen countertop?  Best be doing something with them before our Company arrives and the Fruit Fly armies take over!" 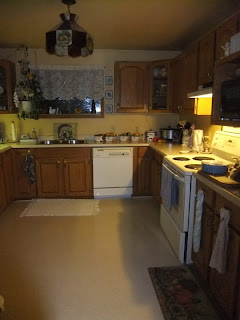 It was brought to my attention, just the other day, that I had Key Lime Pie filling in my baking cupboard, and did I think someday I could make it?  I was informed by my dear husband, Rob, he had made this purchase, placing same in our cupboards with hopes I would notice them there and go..."oh when did I buy those, I had best make that and use them up, as that is something my Rob would like!".  NOT.....but I did relent, put the Peaches to the side for the time being and.....

"Rob got himself a Key Lime Pie made, unfortunately without the Graham crust he had originally ordered with it." 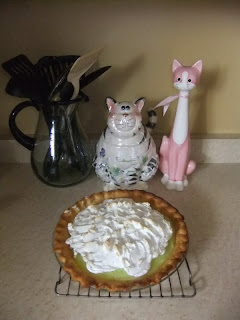 "I never did hear any complaints about the Crust as he was consuming his piece of pie." 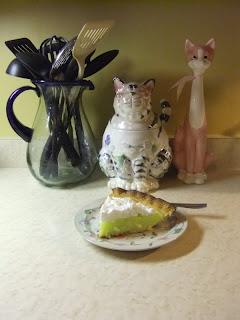 When I was making the Key Lime Pie, just after lunch, I heard sirens on the Highway.  When I looked out the window, I also noticed Rob was gone in the Taxi Van.  At the time, I didn't think anything of it and carried on with the pie.

Quite a bit time had passed when Rob came back home, stating there had been a "two car headon collision" just up on the bend from us.  He had heard the crash and drove up to see, finding there had been this collision.  He had stayed to help Ambulance and Firemen staff with removing the debris that was shrewn on the highway and holding a stretcher.

Rob said he could not believe the eight passengers, four in each vehicle, were not fatally injured.  He also told me it was most difficult for him to hear those small children, who were in the one vehicle, crying.  They must have been terrified.  He was also quite "shocked" that they hadn't even had seatbelts on or that there were no children's car seats in the vehicle either, as they were smaller children, much like our own grandchildren's sizes.  They truly were blessed, and hopefully the trauma will soon be erased from their little minds.

Erasing trauma from one minds can never be an easy thing to do, in my opinion.

Yesterday I had came across a blog, shared by others on Facebook, of a Godrich resident who has been sharing her realities of trauma and coping on her own personal blog.  When I read Melissa's account of the Godrich Tornado's effect on their lives it brought tears to my eyes, but at the same time an admiration for her strength and compassion for her own family and townspeople.

This is Melissa's story:

Should you "click" on newer posts at the end of each of Melissa's entries, it will take you through her days one by one......"Stand Strong and Remain Brave Goderich" !

Labor Day weekend will more then likely come and go as fast as I felt Summer go by me, but with it, it brings the Fall Fairs, which I believe have started in and around Bruce County already.

I am hoping the Wiarton Airport's long term forecast is WRONG, and there is not as much rain as they are calling for, as Doug and Vicki are bringing along their Motorcycle with them, and I am hoping we will be getting out and about, touring on them, throughout the whole weekend ahead.

In the meantime, what is the Wiarton Airport weather guy saying about today?

Showers overnight?  Okay, I can live with showers overnight, even in the evenings, but "back off" throughout the "daytime" hours" rain !!!!  LOL, wonder if that was a "tough" enough effect for the weather guy to hear?

Before I am off and running into my day ahead, I would like to thank my family and friends for all their kind words and encouragement, many times, for me to continue on with my "blog".

As I reflect back to when I began in March, with the help of my Nephew-in-law, Jay, my biggest "fan club" at that time was my sister, Jeanne, and our friend, Elsie, not either of them missing a single day of reading my "blog", along with their many comments on telling me how much I have "made their day, by sharing my day" with them....

I also have to share my thanks with my "biggest life fan".  My love and gratitude towards my husband, Rob, aka my "Crabby Cabbie", who really isn't all that Crabby most times, and who is always there for all my "yakky" and "tearful" days combined, is real and solid.  I could not have a better man at my side to support me, as he does, and that has been along for the ride in life with me throughout all my good and bad days.  Thank you, Rob, as I do know you read my "blogs" in fear I might say something not so "blog" appropriate in your eyes about you.....lol .... xxx ooo.

*Sigh*, there goes that Miss Lexus, being very "vocal" again.  I suppose I should get off my duff and take her out for her morning jaunt.

Here I go, once again, off and running towards a new day's adventure, "Just North of Wiarton & South of the Checkerboard".