Are Plans Really Made to be Broken????

My plan to stay home yesterday and accomplish what needed to be done here in our own home most certainly did not go according  to plan, not even one little bit....umm, maybe I could count folding a load of laundry and making our bed as "one little bit".

Mental note to ones self, "stop making plans, then there will be no disappointment if they don't work out the way I had planned".  LOL, now will I remember this note to myself?  .... I wonder?

My yesterday all began with picking some beets and Zucchini from the garden to take along to my friend, Diane, who works in Wiarton, as well as a couple of other items I wanted to drop off to her.  I didn't return back home until around 10 a.m. to find Rob standing in the driveway waiting for me so we could head over to Sauble Beach to our friend's place, Barry and Colleen's.

"Couldn't help but notice on our drive to Sauble Beach how angry those clouds looked and how  the bean fields appeared ready for combining". 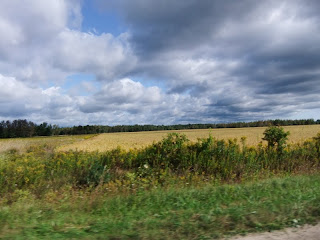 Since Rob started his own thing last Friday with Southampton Taxi, he had to get some signage on his vehicle, and it just so happens our friend Barry has had his own signage business for quite a few years.  Rob had asked Barry just last week if he could put together what we needed to get started, and Barry came through in just a matter of days.  Thanks Barry, as we really appreciated your help in such short notice !!!

"We arrived at PJ Signs in Sauble Beach in good time for Barry to take time out for us." 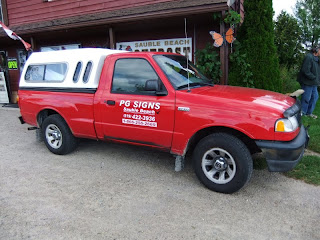 What a double sided bonus this trip was, as Rob hung with Barry while they did the signage to Rob's Taxi van, and I got to have a nice lengthy visit with my girlfriend, Colleen.

We arrived back home around lunch time where I just had to take pictures to show how "wonderful" Barry's signage looks on Rob's Taxi van. 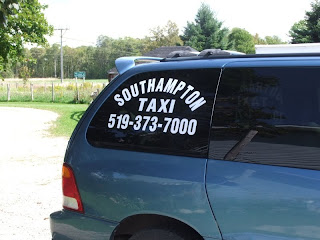 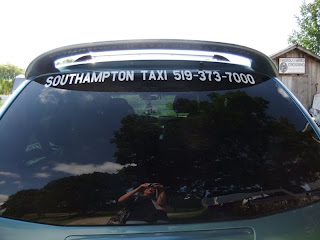 "....and this was the very "best unexpected" part Barry had really done for Rob !" 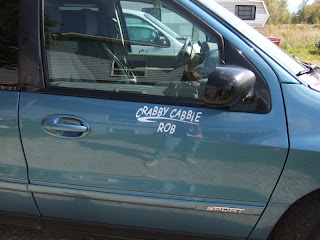 "Here is "Rob" looking not at all too much like a "Crabby Cabbie" at all !" 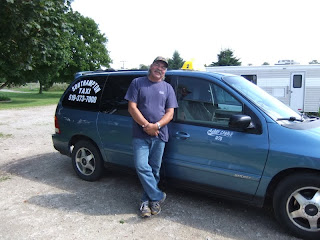 As I am looking at these pictures, more and more, I am noticing how shiny my "Crabby Cabbie" has his vehicle looking.....ummm, but I am sure I have been asking since the Spring if I could have our outside windows cleaned?  Is this just another "Man" thing, or dare I say just another "Rob" thing?

LOL, I am sure I will be pointing this little "matter" out to him in the very near future.

After all the "signage" excitment I had yet to make our dinner, so off to the garden I went to pick beets for ourselves.  I finally got a dinner prepared of boiled beets, new potatoes, while Rob grilled Chicken Breasts on the barbecue.

It was a pretty good dinner, "Let me tell the World", as Rob grills the chicken to perfection...crispy skin on the outside, moist and juices running clear on the inside....um mm good it certainly was !

With dinner had and cleaned up after, I was finally able to tackle the load of laundry that needed folding but not until around 3:00 p.m. ..... I wasn't long into folding it when it all came to an abrupt end !

"It was red, big, had long legs, and looked like it could give a nasty bite if it was allowed to; I absolutely HATE Spiders !" 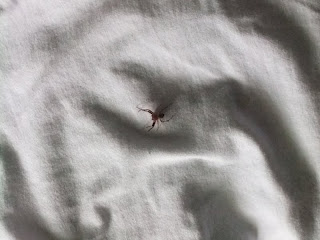 Omg, Rob was gone, with nobody else around to rid me of this nasty little problem, what was I to do?

Well let me tell you what I did, I first took it's picture in case it did manage somehow to bite me, so I would have evidence that it was even there in the first place, if I had to give proof at some time later; I then ran into our bathroom to pull lots and lots of toilet paper from it's roll, going back with it to finally grab this "red long legged monster", and run back to the bathroom as quickly as I could to flush it down into the bowels of the Earth !!!  I really ended up needing this picture after all just to back up my story on how ugly and scary it all really was !!!

Seriously, I really do hate spiders, and we certainly have our share of them residing in our home along with us.  I really really hate the black hairy legged ones that "jump"....they can grow to be "huge" !

Enough about such an unpleasant matter, and onto a website I stumbled across yesterday that I think could be useful at times in my own kitchen, as well as others, that I just have to share ... a  "Quick and Simple Cooking Conversions for Slow Cookers", as follows:

This website also includes some slow cooker recipes embedded in it as well.  Thanks Pillsbury !!!

I am going to try a new method of making "Egg Salad Sandwiches" that I had also came across yesterday, so I took Bandit along downtown sometime after the 6 o'clock hour to go for a walk, then went into Wiarton's local Foodland Store to pick up some plain yogurt and fresh garlic I needed to make the egg salad.  Should the new method of how to make egg salad work out to my liking, I will be sure to share that as well in the next couple of days.


On to the weather forecast for today....at the following link:


I have a full day ahead of me, as I am attending my first VON SMART Program exercise group in Wiarton today, and also going to get my haircut !!! I am sure there will also be some mundane household chores in my day somewhere.....

Before anything, I really think I am in need of that second cup of Java to get me "kick started" before I am off and running into my day ahead, "Just North of Wiarton & South of the Checkerboard".
Posted by Cindy@NorthofWiarton at 9/15/2011 08:02:00 am