A Very Busy But Rewarding Day ...

What a day that was yesterday !  I actually think I made some kind of "dent" in something, all but the dust mites and dust bunnies, but there still does seem to be a "dent", so I do see that as being a "reward" in itself !

It all started with the making of two Blueberry Zucchini Loaves, the stripping of our bed, two loads of laundry washed and hung, cleaning up and doing dishes twice after the baking was complete, setting the oven to self-clean (dumb idea as it was so hot in here, lol), Bandit and Lexus in and out a few times, our bedroom dusted, finally a shower somehow "squeezed" in, a very delightful, and long overdue, visit with my girlfriend, Colleen, who I hadn't hung with in a few weeks, back home to taking laundry off the clothes line, the remaking of our bed, supper table set, a supper of burgers and salad, then cleanup, updating and posting a Basic Salsa recipe onto a Cindy's Recipe Exchange document on Facebook, and finally going onto the 10:00 p.m. hour, crawling into a freshly made bed.

I think I have most of it all covered, except for my usual important phone calls scattered here and there throughout my day.  Still not everything accomplished, but I needed to take that "time out" for myself and go visit my girlfriend, as it was one of those "you need to take time out" moments.  I did it, and it was just what I needed.  Housework will always be there for us, and life is too short not to be taking it all in and enjoying it.

Nothing really much of anything to take pictures of yesterday, although I did do some coverage on the making of the Blueberry Zucchini loaves !

"The Zucchini ready to be chunked and put into the mini Braun processor for grating." 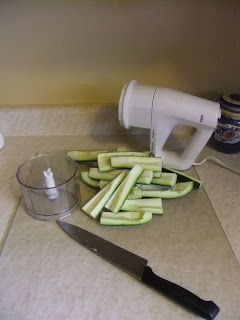 "The Braun does a pretty good job, if I say so myself.  Sure beats dragging out a big Food Processor, and certainly saves my arm from using a regular grater."﻿ 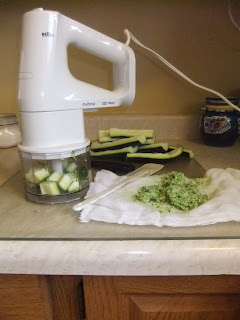 "Dry and wet ingredients almost ready to be mixed together." 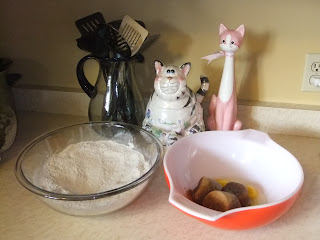 "All mixed together, along with chopped pecans and BC blueberries." 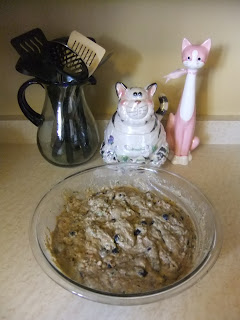 "Divided evenly between two loaf pans and already for the preheated oven." 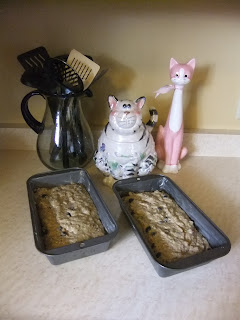 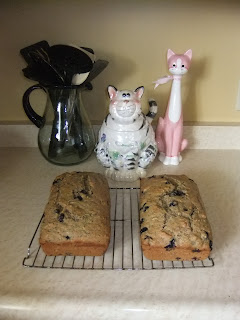 All ready halved, put into freezer bags and in the freezer.  One waiting for an upcoming Caregiver Support Circle Meeting this Wednesday, another for next weekend's company to arrive, and the third for that "unexpected" company we all have from time to time dropping in on us.  Oh that fourth portion?... well between myself, Rob and a couple pieces gone to my girlfriend, Colleen's, what can a I say?

Looking for the recipe for this Blueberry Zucchini bread, you can find it under my blog title of "A Major Tragedy Close to Home" August 22nd, or on Facebook, under "Cindy's Recipe Exchange", or by emailing me at justnorthofwiarton@live.ca

Someday I will learn from somebody else how to setup all my posted recipes, all orgranized, on a sidebar under this "blog".  In the meantime it will have to remain the way it is, as I don't have the time to figure it out right now as there too many more important things to do then sit in front of my computer the "whole" day long trying to figure that one out....lol.

How many times can I express how much my friendships mean to me?  Not ever enough!  Colleen and I had a "great" visit.  We have so many things in common with each other, and even the things we don't are a nice balance between us, or so I think they are.  Children, grandchildren, recipes, cooking, baking, houseplants, outdoor plants, likes, dislikes....we cover it all when we are together, and then some !

Colleen hates mushrooms; just hates the taste of them and refuses to put fungus in her mouth.  She also hates beets, saying they "taste like dirt".  When I was leaving her place to come back home, I said, "I have to go home and pick some dirt for our supper." ....  LOL, the faces she makes is worth making the statement.

Oh yes since preserving/freezing Season is now upon us, and we are "gathers and storers" by Nature, I was asked on my Recipe Exchange if I had a Salsa Recipe.  I just happened to have such a recipe that was given to me by one of my brother's co-workers from the Kitchener Fire Department years ago...some of those guys could really cook up a "storm".  Here it is:

Grind vegetables. In large pot mix all ingredients and simmer for 1 hour. Hot process jars and lids. Pour salsa in jars, one at a time, wipe off jar top. Place on lids, screwing down tight. Place jars on towel on cupboard, not allowing jars to touch each other. Leave until lids pop.

Another tried, tested and true Recipe either that I have tried myself, or someone I know personally has tried.

I am amazed at "Cindy's Recipe Exchange", in just the past couple of months the group members has grown to 63, including myself mind you.  It is just plain and simple everyday stuff, nothing fancy or gourmet like, somewhat like I see myself as being....lol, I do suppose my cooking and baking is reflected through how I see myself somewhat?

Please feel free to come on over in Facebook to check us out at "Cindy's Recipe Exchange", and see what has been or is happening at any given time in my Kitchen, and/or in someone else Kitchen for that matter.....the old saying holds true, "the more the merrier", especially in the warmth and goodness coming from one's own kitchen.

I have still lots to catch up on in my home today, inside and out....so onto the local Wiarton Airport's weather report:

Another nice Summer day....keep them coming !

Missy Lexus is being vocal and expecting out at the moment, the "Crabby Cabbie" is still sawing logs in bed, Bandit is being his usual quiet self, and here I am off and running, once again, to get my day started, "Just North of Wiarton & South of the Checkerboard".