Never Going To Catch UP With Another Day Off????

Yesterday, I am sure I only made my bed, put a Roast Beef and veggies into the slow cooker, and called it a day ....  can you believe it?  a day off for me?  I can't believe it either...

LOL, I just remembered I did manage to do a load of laundry and hang it out on the clothes line, I also went on a mission in the morning with my Crabby Cabbie, arriving back home to having our company, Rob's sister, Delores, and her husband, Darol, arrive shortly thereafter.

It was nice of Delores and Darol to bring along with them all the fixings for a lunch for us all.  Almost straight after lunch, Darol and Rob were off, like two shots, down the road and on their way fishing somewhere or another, with barely a "goodbye" to either of us girls, or if they did I certainly can't remember hearing one.

Delores and I had an afternoon of catching up on children, and grandchildren, as well as a little reminiscing about past years....and I mean past years....years when Rob and herself  were children.  LOL.

Our guys finally rolled back in here, after an uneventful fishing excursion of a few Sunfish and a couple of small Rock Bass, just in time for me to get supper on the table.  I believe the slow cooker Roast Beef, baby carrots, boiled beets, new potatoes and gravy were enjoyed by everyone.  I didn't even have a "desert" made ahead !  Shame on me !!!  LOL, I think supper was filling enough without a desert to over stuff ourselves with.

After supper was done with and cleaned up, we took to the "easy" chairs in front of the TV to relax and chatter among ourselves.  I had to take some time out for Bandit and Lexus, as they were feeling a little bit left out of the loop all afternoon.  Once getting them both outside, it wasn't long before Bandit was quickly banished back inside, as Lexus had just begun her second "heat" cycle this year.  I certainly do not want to have a second "Puppy Saga" this year....lol, so I will be keeping things under "wraps" for the time being until at least the New Year rolls around....

"Isn't she just the prettiest little girl you have ever seen???" 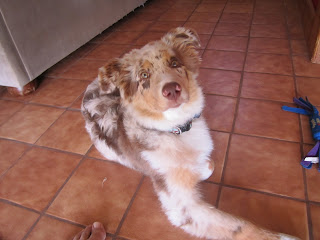 "....and has her new family totally wrapped around her little "paw" by the looks of things in this picture !" 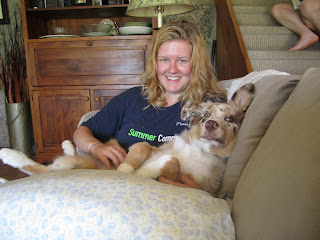 Way to pick out the family that was going to spoil you the most, Scout !!!  I really can not imagine that any one of the "Magnificent Seven" did not adopt a family who are not "spoiling" them.

I called it an evening last night about 10:00 p.m., since today I was getting up early to head out to the Keady Market with my girlfriend, Reenie....but that is another story which will just have to keep until tomorrow, cause at the moment I am totally exhausted from the day I just had...especially when I find myself doing my daily blog at 6:00 p.m., instead of 6:00 a.m......what's wrong with that picture....lol.


I am signing off and NOT running at the moment, "Just North of Wiarton & South of the Checkerboard".