Another Start To A Week Has Rolled Around Once More !

Where did this past week go to?  Another one under my belt that just flew right by !!!  For the past few years, or maybe more for that matter, I have been finding myself say, "every year I get older they seem to be going by faster and faster".  Thinking that is what is happening to the weeks now....lol.

I don't think I even seen the outside yesterday until just after 4:00 p.m., since I was so busy inside either chopping or mixing most of my day away......however the rewards of what I sowed have been well worth the harvest.

"Garden Macaroni Salad, and trust me that is one big bowl it made up!" 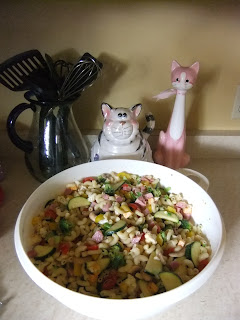 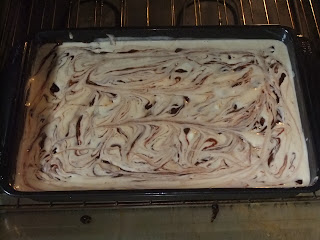 "Fresh out of my oven, a little bit cooled and a bite cut out for my own personal sampling." 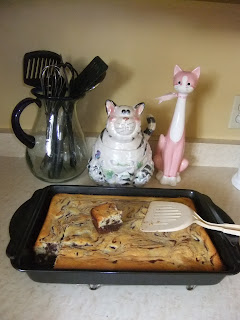 All I can say is yum, yum, yum......well worth all the sowing.  I am now prepared, so bring on the "Masterson Reunion" !

The "Crabby Cabbie" was working yesterday and quite busy with Wiarton's 2nd Annual Rodeo going on this weekend, a wedding and a few other functions happening around town.  I had been invited down to the "other side of the tracks" of Southampton to dinner at my Aunt Gladys and Uncle Basil's in Port Elgin.  I graciously accepted since I was hot, tired and was going to be home alone anyhow, so I was thinking it would be a nice change to have some pre-reunion quality time with a couple of my first cousins and the Aunts and Uncles (of course).

I just made it to the other side of Wiarton's outskirts when I came upon, what I had thought at the time were Hydro pole lines, but actually were Telephone lines that the transport truck couldn't clear and more then likely by the look of it went with him as he tried to pass under them....

"Wow, can you imagine what was going through the driver's mind when this was happening?" 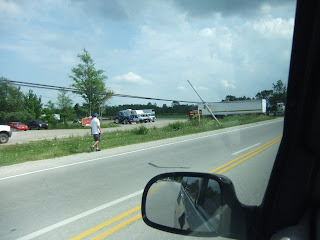 Just a little bit further up the road to the right is where Wiarton's Rodeo was taking place.

"This is the front field where I believe all the Rodeo personnel and competitors were camping out for the weekend." 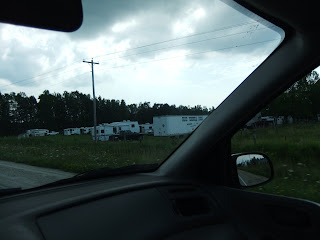 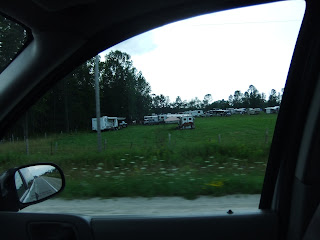 I finally made my way through my beautiful hometown of Southampton, finding myself soon on the other side of the tracks and stopped at a stop light just in front of my Cousin Vi's house.

"This is where Vi lives with her husband, Ross, who "tricked" her and had her move to Port Elgin at a very young age......" 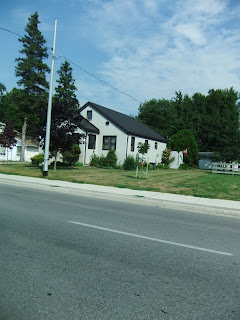 "I arrived safe & sound at Aunt Gladys & Uncle Basil, to be received by the welcoming crew, consisting of Uncle Reg & who else but, Ross !" 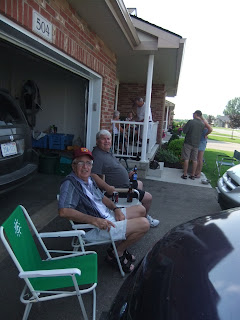 "Here are the Aunties, Aunt Gerry in the background and Aunt Gladys needing to sit down and relax." 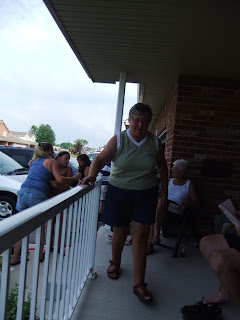 "....and here is Uncle Basil plying Aunt Gladys with some some relaxation tonic." 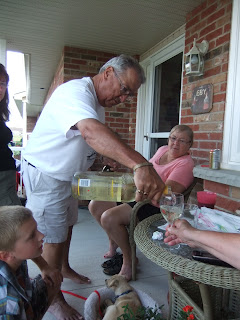 "Umm, I am really not sure what is going on here with Uncle Basil, and I am about as confused wondering, as much as the look on his face." 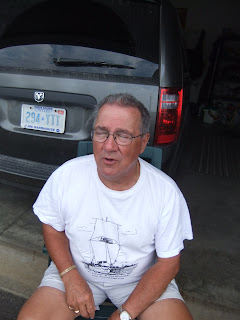 "Here are a couple of the "younger" first cousins, Cathy, Troy's wife, Wendy, Troy and Jennifer." 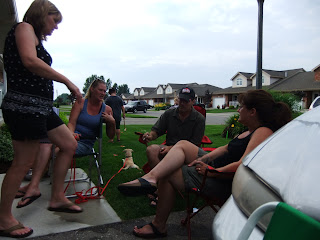 "Whoohooo, the food is arriving with Uncle Reg rearing up the troops !" 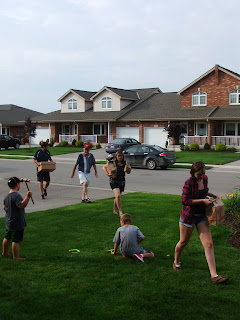 "Cousins Vi & Cathy getting the food organized before the "gates" are opened." 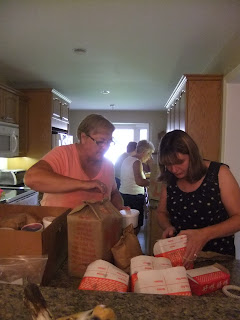 "Cousins of the cousins situated, with a friend thrown in for good measure, focussed on the really really good Chinese Food on their plates in front of them." 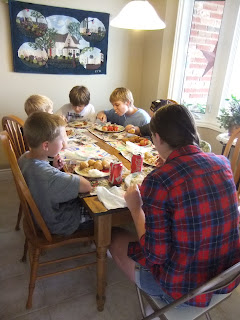 "....oops, then a couple unfocussed way too quickly, by they way that finger is pointing, lol !" 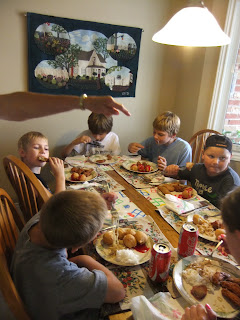 "Eventually all us "big" kids made it through the buffet lineup, only then did the Aunts & Uncles did get their turn." 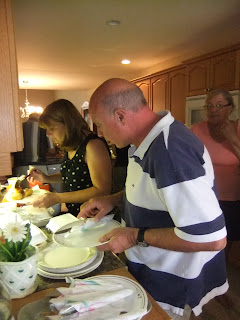 ﻿
After a couple hours of great family enjoyment and a very good feed of Chinese Food, I might add, I had to get back to my home "Just North of Wiarton & South of the Checkerboard".  Coming back into Wiarton only to see the Bell lines were still being worked on after more then 4 hours later.....

"Not only where there Telephone repair trucks, but Hydro ones as well." 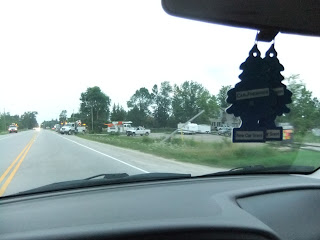 Wow that was some rewarding day both in the preparation and socialization departments.  I was happy to get back home though, as I was tired.  Bandit & Lexus also happy I was back home, and both happy to see me as always.

Aunt Gladys sent home a mini feast of Chinese Food for the "Crabby Cabbie", as she didn't want any phone calls from him that he didn't get any.....lol, we certainly could not allow him to feel left out, or that could bring on a bout of "crabbiness" forsure !

I finally got into my bed just after 10:00 p.m., not awaking until just before my "Crabby Cabbie" returned home at 2:30 a.m..  I think I will let him sleep until at least 9:00 this morning, as he did have a very long work day yesterday.

I am hoping with all my heart the Wiarton Airport will be very kind to me today with some good weather in today's forecast, so here goes nothing....

Um, did I ever mention I have a relationship with the Wiarton Airport's weatherman that consists of a bad marriage feeling at times?  If that thunderstorm doesn't hold off until later, and I mean much later, this afternoon, I will not be a happy camper.  LOL, it will be, what it will be, despite any complaints I might have.

I am looking forward to my day ahead, but need yet to get a few priorities organized here first, so here I go off and running, once again, "Just North of Wiarton & South of the Checkerboard".
Posted by Cindy@NorthofWiarton at 8/07/2011 08:28:00 am