A New Scratch On My Kitchen Counter !

We just had the most glorious cooling off downpour of rain here that had started at around 6:15 a.m. to last about forty-five minutes.  Not only did it cool the air down a bit, but also gave the Earth another big, much needed, gulp.

I just hope prayers of rain will be answered soon for some other parts of the World that are in much more dire need of the rain then we were.

Yesterday was a beautiful Summer day here with the humidity gone from the air and sunshine in abundance.  Even last night the sky was seemingly brimming over with stars.  LOL, I should know the sky was full of stars, as I was awake for the entire duration of it with the exception of maybe a couple of hours.

I was able to get two loads of laundry done, a little bit of weeding in the vegetable garden, and a bit of tidying up here and there in the house.  Nothing too strenuous.  I did not end up going to one of the many posted Yard Sales, as Rob said the traffic was crazy downtown Wiarton, and he was even finding it difficult to get around the back streets with the cab, so I did not want to be bothered with that.

My Crabby Cabbie was so busy yesterday taking people all over the Peninsula and around, that I barely seen him.  Fortunately he had his friend and sidekick, Zoltan, take over the phone while we had the supper I had planned on having Friday night.

It was all good though, and the Greek Chicken with Tzatziki Sauce was a total hit with both Rob and myself.

Marinaded, skewered and ready for the grill...... 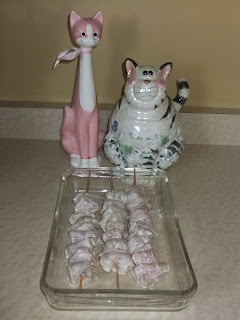 The finished product, alongside a fresh garden salad and baked new potato. 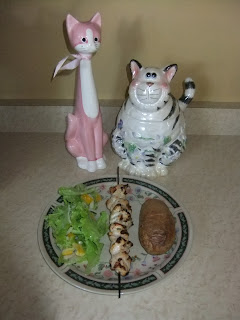 Let me tell you, it was so delish !  I would recommend the chicken be marinaded more then the recommended 20 minutes, as mine was left for almost 24 hours, so even overnight would be good.  The lettuce was fresh picked from our own garden, unfortunately it will be a bit until our own peppers, onions and potatoes are ready.  The recipe for this dish can be found on the my blog for the previous day, or at Cindys Recipe Exchange on Facebook.

After this wonderful supper was had by myself and Rob, the Crabby Cabbie returned to work, and Lexus and I headed downtown for our walk.  We really enjoyed ourselves last night.  Since it had been sometime since Lexus and I had been out walking together, she was finally getting back into the heeling part of it this second time around this week.  Made it much easier on the two of us.

I actually had a couple of comments this past week with regards to a certain new Scratch on my kitchen counter.  I was wondering when the time would come that someone would notice her.

Here is ICE aka I C Everything . 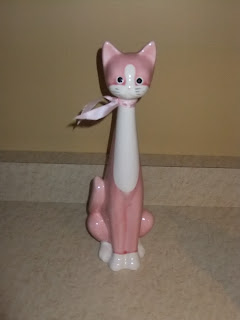 A match made in Heaven.....I believe IKE (I Know Everything) even has a little blush going on. 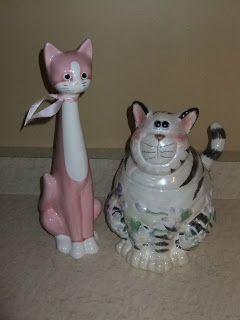 LOL, I came across ICE on the July 1st Canada weekend.  I just could not resist her, and by the look of IKE, he obviously could not either !  My kitchen is now complete with my Kitchen Cat, IKE, and his new Scratch, ICE.  How better does a kitchen get then having a pair like these two to keep a watchful and encouraging eye over everything I do.  Lol, lucky me !

Special thanks goes to my niece, Joanne, who named ICE, in a blink of an eye I might add, before Elsie had the chance to even see her.  Elsie is the gal that had the honour of naming IKE, and so cunningly so. I must say of her.

I think now that the rain has subsided, I will check the weather for the rest of my day.

It is actually starting to clear out there now, so I am sure the day will turn out to be another beautiful summer day.

I am feeling pretty weary and tired at the moment, so I think I will wrap things up early here, head outside with Bandit and Lexus for them to have a jaunt, then try to gain a little more energy before I head into the rest of my day, Just North of Wiarton & South of the Checkerboard.
Posted by Cindy@NorthofWiarton at 7/31/2011 08:17:00 am